Dr. Sidek graduated with B.Sc. (Hons) in Physics and was conferred with Tengku Intan Zaharah Gold Medal award for the most outstanding undergraduate physics student from the Universiti Kebangsaan Malaysia in 1984.

He then pursued his MPhil. which was converted to a PhD program due to his outstanding performance, at the University of Bath, United Kingdom. Whilst at the university, he gained considerable experience and knowledge especially on Solid State Physics as well as low temperature and high pressure ultrasonic techniques.

He received his Doctorate in 1989, and was appointed as a lecturer at Universiti Pertanian Malaysia (now known as Universiti Putra Malaysia). He then instinctively equipped his laboratory with basic ultrasonic research facilities to study and continue his research on the ultrasonic properties of natural latex, palm oils, as well as various species of tropical wood and concrete filled with natural rubber. Subsequently, with his expertise gained at Bath, Sidek and his team initiated to synthesize some borate glasses for ultrasonic and electrical characterization.
IMEJ RAWAK 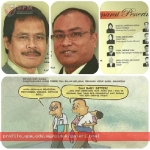